The historical region of Alsace in northeastern France sits on the Rhine River plain, making it fertile land for wine production. Across the region are quaint medieval villages made up of colourful half-timbered houses and with German and Swiss influences. Originally houses were painted according to the shop below, nowadays owners can choose, which has led to Alsace’s multicoloured streets with criss-cross patterns.

The capital of the region, Strasbourg, was a point along the important trading route down the Rhine. Due to the strong economic background, it is one of France’s most beautiful cities. As you wander the streets of Petit France and pedal along the banks of the River III, you can get a real feel for the city.

In the beating heart of the city is Strasbourg’s magnificent Gothic Notre-Dame Cathedral. Every day at solar noon the life-size cock crows three times during a procession of the 18-inch-high figures of Christ and the Apostles. Climb the stairs to the platform where you can see the forested Vosges mountains and Germany’s Black Forest. 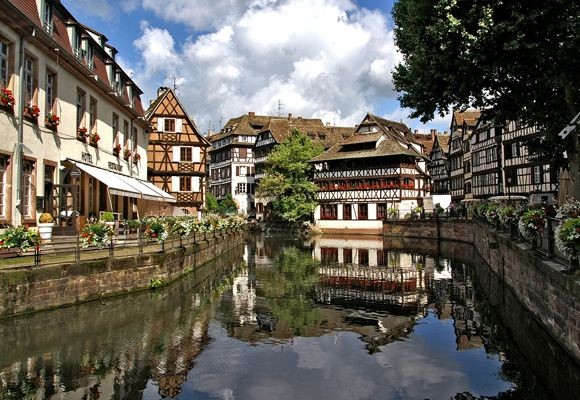 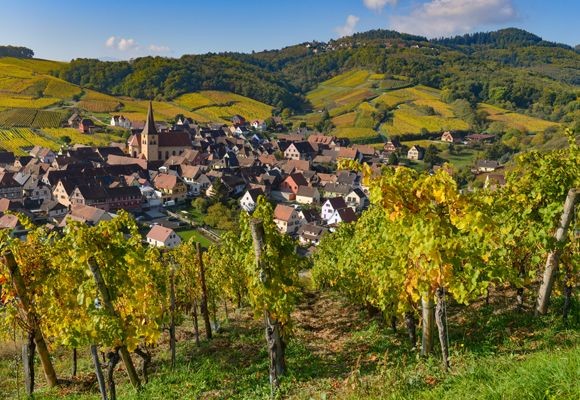 On the eastern slopes of the Vosges mountains, pedal along the Bruche canals and pause for wine tastings in local restaurants. Founded in 690 by Saint Odile, the nunnery on the Mont Sainte-Odile peak is well worth a visit. After a fire in 1546, Hohenburg was rebuilt in 1661 and occupied by Premonstratensians.

From here, cycle to the romantic town of Colmar where you can weave down the canals of Little Venice. Originally home to a community of wine producers, gardeners and boatmen, both sides of the canal have typical Alsatian architecture with vibrant coloured flower baskets.

Our tours run between April and October, which tend to be the drier and warmer months. Alsace has a mild climate and temperatures are on average between 10-26°, at its highest in July and August.

Famous for its Rieslings as well as its Kronenbourg and Meteor beers, both accompany the traditional choucroute à L’Alsacienne dish, a plate laden with meat and sauerkraut. Another local favourite is Flammekueche made with sour cream, mushrooms and local ham.

Besides Riesling, Alsace produces a variety of whites including Pinot Blanc, Pinot Gris, Gewurztraminer, Crémant d’Alsace, a sparkling wine that is the fastest growing AOC in Alsace. There is no better place to taste these whites than in a traditionally Alsatian winstub. Originally, growers would sell off surplus wine here. 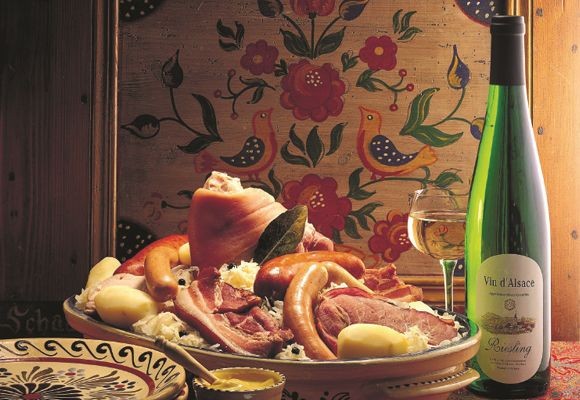