Pedal Through History in France & Italy

France and Italy are historically diverse countries where you’ll find medieval châteaux, ancient castles, opulent pastel palaces and ingenious Roman highways. Explore these intriguing regions on two wheels, stopping off to delving into the local history, dine on Mediterranean cuisine and taste fine wines as you cycle through these fascinating countries.

Renowned for its renovated classical and neoclassical architecture, fine wine and haute cuisine, the south-western city of Bordeaux is often referred to as Petit Paris. The city’s main attraction is the Place de la Bourse, an 18th-century square that took 20 years to construct. Here you will find Antonio Canova’s neoclassical Fountain of the Three Graces, which the Miroir d’eau reflects.

One of the oldest belfries in France, the Grosse Cloche was cast in 1775. The bell chimes six times a year for major celebrations such as Bastille Day and Remembrance Day as well as at noon on the first Sunday of each month. Below, visit the dungeons where people who disobeyed curfew or public order were imprisoned. The Musée des Beaux Arts dates back to 1881 and houses works by old masters, including Picasso, Matisse and Van Dyck among other well-known Dutch and French painters.

The Cité du Vin museum offers an insight into how vineyards adapt to landscapes and which wines are produced around the world. As Bordeaux is the wine capital, there are plenty of opportunities to taste world-class vintages. Nearby Saint-Émilion and Pomerol are home to some of the region’s famed vineyards. Saint-Émilion’s Les Cordeliers ruins date back to the 4th-century; visit the monolithic church carved from limestone and the underground cellars where sparkling wine is produced. 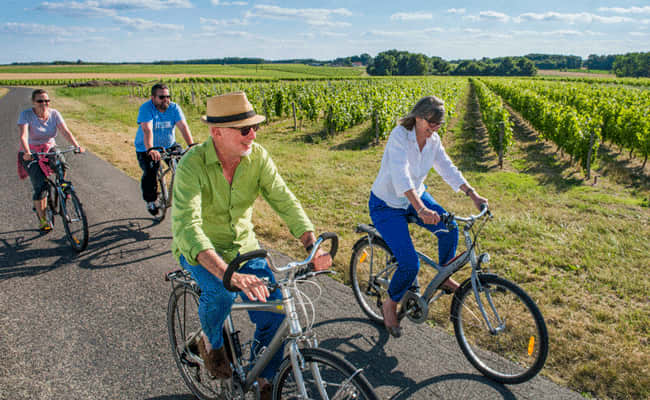 Journey through centuries of history in Normandy, starting with the thousand-year-old Bayeaux Tapestry – a legacy of the Normans that depicts the events of 1066 – and the D-Day landing beaches of 1944. Begin among the medieval and gothic architecture in Bayeux before exploring the remnants of the Second World War, which include the Bayeux War Cemetry – the largest war cemetery in France – and the German battery at Longues-Sur-Mer.

As you cycle along the white-chalk cliffs of Normandy’s coast, visit the battle-scarred beaches of Omaha, June and Sword. Pay your respects at the memorials to commemorate those that lost their lives on June 6th 1944, most notably Omaha beach’s steel statue of Les Braves.

The 19th-century seaside town of Cabourg was a popular holiday destination with French novelist, Marcel Proust. Stroll along the promenade that is lined with primed gardens, stately villas and Belle Epoque architecture. Continue on to the half-timbered houses of Beaumont-en-Auge and the pretty port of Honfleur. Inspiring Eugene Boudin’s impressionist art, Honfleur’s cobbled streets and bell tower make it a charming coastal town. 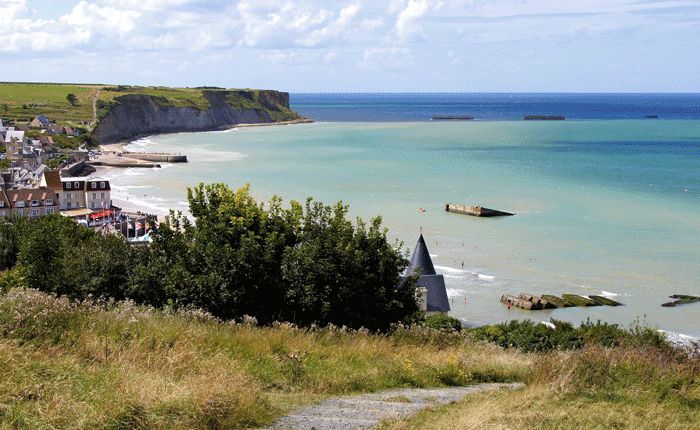 The Loire Valley’s impressive architecture encompasses monolithic caves, medieval fortresses and opulent châteaux. With more than 300 châteaux that date back to the 17th and 18th centuries, each has its own character and beautifully kept grounds.

Arching over the Cher river, Château Chenonceau was bought by Henri II for his governess – and mistress – Diane-de-Poitiers. Creating a beautifully designed garden and the bridge across the river, Diane was evicted by Henri’s wife Catherine-de-Médicis upon his death. Catherine added the gallery to the bridge, which has become one of the most photographed châteaux in the Loire.

Château de Villandry has vast and impressive gardens that are terraced and geometrically formed with lines, colours and designs. Stop at the 400-meter-long Royal Fortress of Chinon that was once lived in by Henry II of England, followed by King Phillip II of France and Charles VII. Don’t miss the limestone troglodyte cave-homes, restaurants and museums in Turquant. The village is bursting with artisans that teach classes and display their works. One of the caves is even used to grow mushrooms. 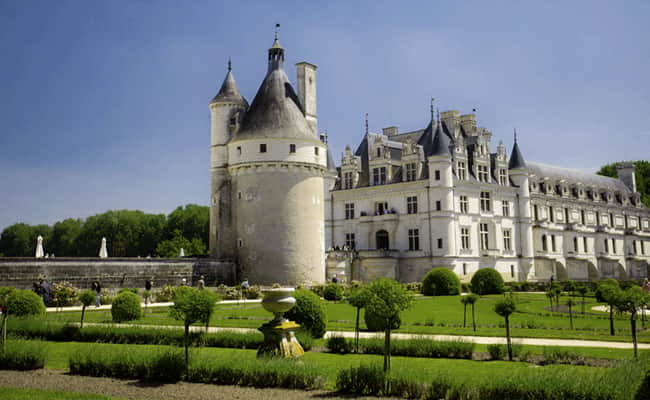 The southern region of Provence has an amalgamation of influences, having been fought over since Greek and Roman times. In 5th century BC, the Greeks cultivated olives and vines, while the Romans built amphitheatres, temples and aqueducts in the 2nd century BC. After the Romans, the region was tussled between many, including Germanic tribes, Arabs, North African pirates and European counts.

Provence is peppered with well kept ancient sights and historical towns. Once the provincial capital of the Romans, Arles has an amphitheatre that used to host fierce gladiatorial battles. Avignon’s Gothic Palais des Papes was once a fortress and palace, and became the seat of Western Christianity.

Saint-Rémy-de-Provence has several art galleries, and the Monastery Saint-Paul de Mausole where Van Gogh was institutionalised. Inside are re-creations of his room and works he painted there. An old Roman commune, Orange has a grand Roman Triumphal Arch – thought to date back to Emperor Augustus – and Roman Amphitheatre that holds performances during the summer months.

The Côtes du Rhône is one of the most famous wine regions in France. Thanks to its location and sun, 171 varied terroirs and vineyards create a wide variety of grapes and wines. Châteauneuf-du-Pape was once a second home to the Avignon Popes and is still a prominent winemaking town. 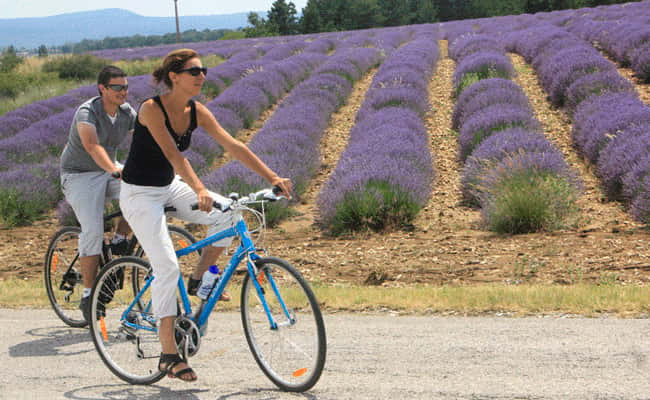 Charming Tuscany and Umbria are packed with awe-inspiring historical attractions, as well as the Italian staples: fresh, fruity wines, and delectable rustic cuisine.

Travelling the ancient path of the Roman Via Flaminia highway is a highlight in itself. It was built by the consul Gaius Flaminius in the 2nd century and is a real testament to Roman ingenuity and engineering. It's certainly worth gliding past the two Foligno Tombs during your trip, too – they're not far from the tour route.

Exploring Gubbio is a must if you want to delve into the region's history. As you'll discover, the cream-colored buildings of the town nestled at the base of Mount Ingino seem to be hiding everything from soaring 14th-century palaces, like the Palazzo dei Consoli, to an ancient Roman theatre. 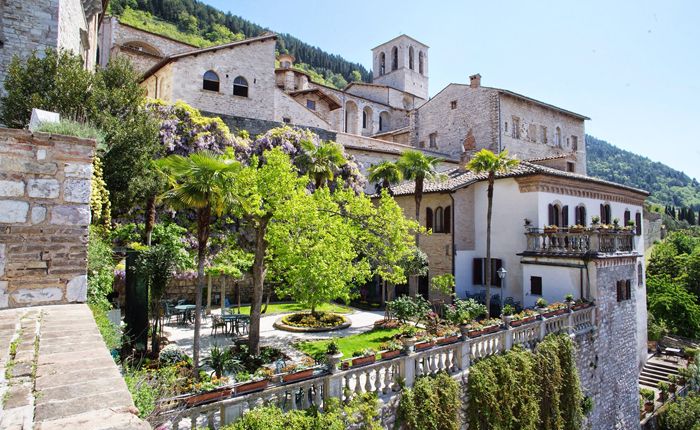 Cycling for Softies’ itineraries are designed to take you through France and Italy's most fascinating historical regions. Discover our tours here.

France Cycling Tours Italian Cycling Holidays
Back to the top