Italy’s south-western region of Campania was dubbed ‘Campania felix’ by the Romans, which means happy countryside. Dotted with historic castles, temples and palaces that date back to the ancient Greeks and Romans, visit the numerous sights as you cycle along the Amalfi Coast. The local cuisine and vineyards rival its history, with Aglianico wine, fresh seafood and mouth-watering buffalo mozzarella. 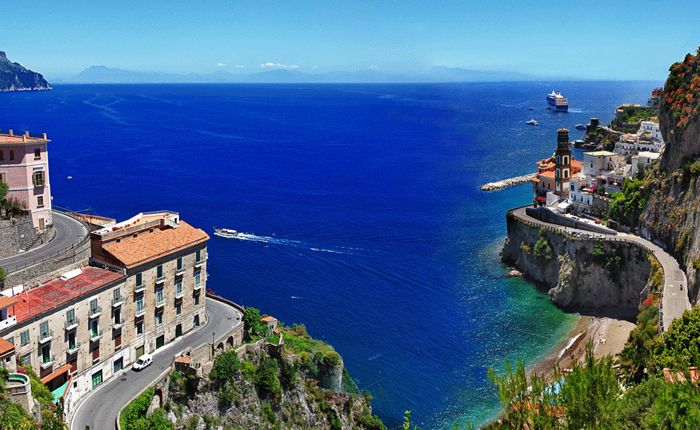 Cycling along the Amalfi Coast

Campania’s ancient sights, temples and palaces offer an intriguing history into the area. The famed ancient Roman city of Pompeii is 25 kilometres south of Naples and lies in the shadow of the great Mount Vesuvius. Pompeii was entombed in volcanic ash for 1,500 years, making it one of the best-preserved historical sites to date. Despite being unearthed in 1599, the excavation didn’t begin until the 1700s. 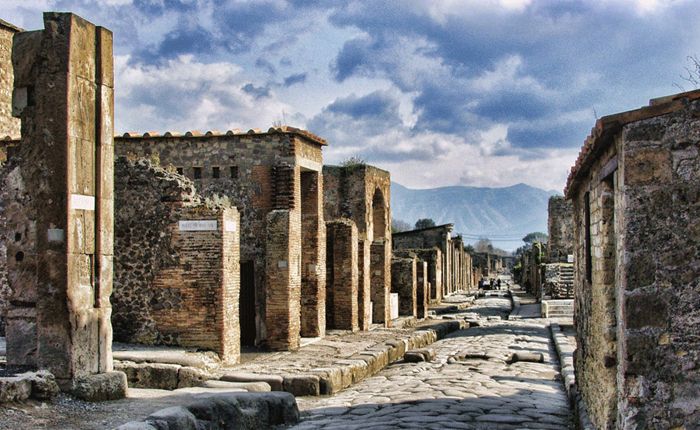 Another ancient Greek site worth visiting is Paestum’s temples, named after the Greek god of the sea, Poseidon. Dating back to the 6th century, the three ancient Greek temples of the Doric order have been well-preserved. Once the great city of Magna Graecia, the on-site museum presents millennia-old ceramics, artefacts and frescoes. You can visit the Heroon – a shrine dedicated to an ancient Greek or Roman hero – as well as the ancient amphitheatre where gladiator shows were held during the Roman period. Don’t miss the Greek funeral painting in Diver’s Tomb! 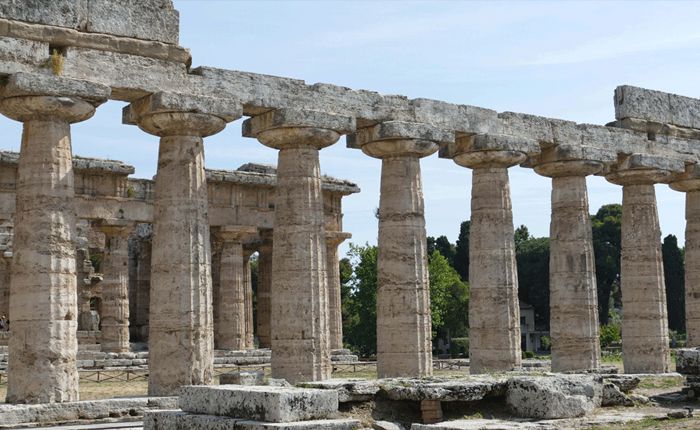 Cycling from Paestum along the Amalfi Coast to Marina di Camerota is an incredibly scenic route, past jagged coastline, pastel-coloured fishing villages and rural towns. The Amalfi Coast cycling route crosses the verdant Cilento National Park, hugging the coast in parts as well as veering inland. 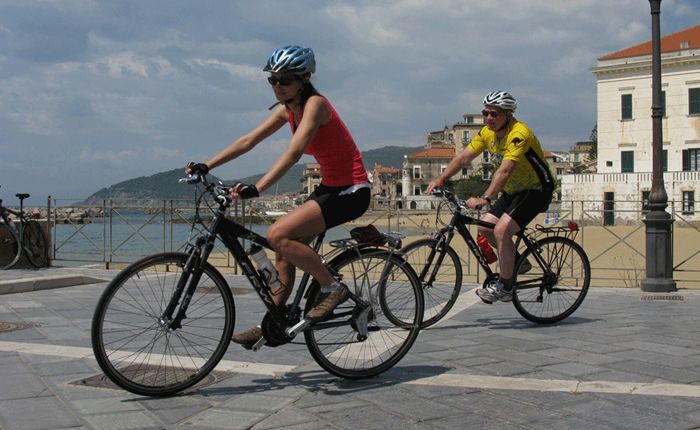 As you cycle past vineyards, olive groves and lemon trees, you will undoubtedly work up an appetite. Taste plump olives hand-picked from the groves, rich and creamy buffalo mozzarella and fresh seafood caught by the local fishermen in one of the authentically Italian restaurants. All meals are perfectly paired with wine from Campania, which boasts a wide variety of grapes. 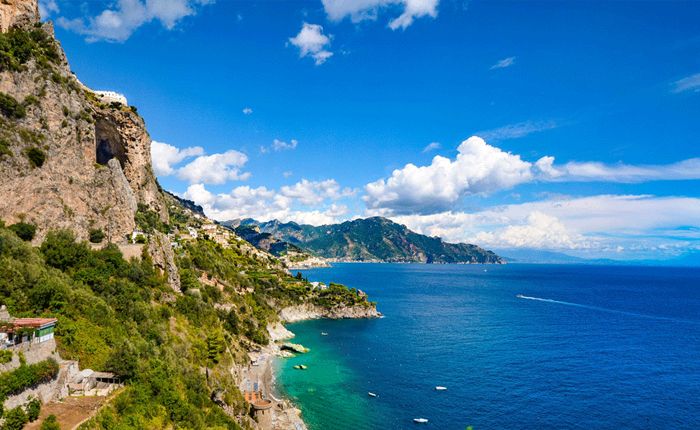 The route along Cilento’s dramatic coastline will take you to the picturesque town of Amalfi where colourful houses are etched into the hillside. The Amalfi Cathedral is a beautiful 9th-century Roman Catholic cathedral in the Piazza del Duomo. Redecorated over the centuries, the cathedral has a fusion of Arab-Norman, Gothic, Byzantine and Renaissance features. 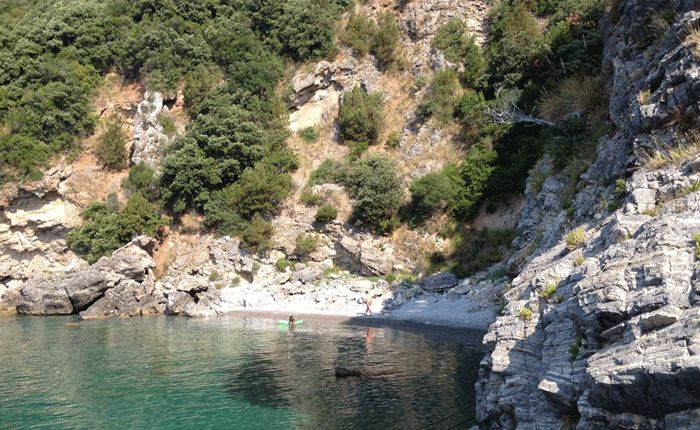 The landscape of the Costiera Amalfitana is immensely varied and surrounded by ever-changing views. Take a bus up into the Agerola high plain to the small village of Bomerano, where you can walk along the famed Sentiero Degli Dei, the footpath of the Gods. The pathway has panoramic views of the Amalfi coast, and on a clear day you will even be able to spot the island of Capri.

If you’re not ready to say arrivederci to the west coast, then visit the thriving coastal city of Naples. The city has a blend of medieval, Renaissance and Baroque architecture. The main square, Piazza del Plebiscito, is where you will see the Royal Palace and the church of San Francesco di Paola. The medieval Castel Nuovo was first built in 1279 as the royal seat for the King of Naples. 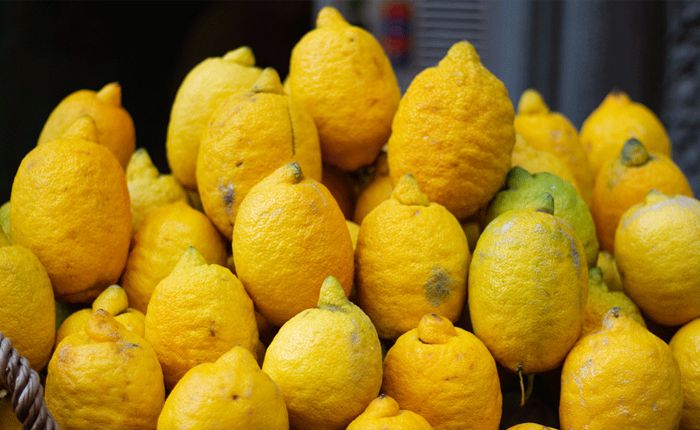 Naples’ cuisine is centred around fresh seafood, with dishes like spaghetti alle vongole (spaghetti with clams) and risotto alla pescatora (Fisherman’s risotto) as well as potato-based dishes such as timballo (pasta pie) and gnocchi alla sorrentina (potato dumpling baked in tomato sauce and mozzerella). Recognised as the home of the Neapolitan pizza, they are also famous for fried pizza and flaky sfogliatelle pastries. After which, a limoncello made with the Amalfi Coast’s lemons will be a useful digestif!